Windows and Shutters Before Screens 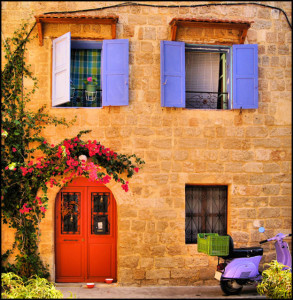 In Southern California, the window screen is one of those crucial household elements that lets residents thoroughly enjoy the terrific climate. With so many days of sunshine and fine weather, it is a great convenience to be able to have our windows open to the world and yet keep the insects and small animals outside the home. Human habitats have come a long way from our days as cave-dwellers.

Windows in the Walls

When people moved out of caves and started building structures to live in, they soon discovered that they wanted a view to the outside world from inside their safe havens. That was how the window came into existence: the first windows were just holes cut into the wall. Often they would be covered by a simple animal skin or large piece of woven fabric.

Gradually, people developed ways of covering the open spaces. In Asia, they started using paper over the window openings. It was translucent, and so let in light, but it also kept insects out. In Europe, several other materials were used. The Romans seem to have developed glass for windows around A.D. 100, but it tended to be thick and rather opaque. Other things used were thinly sliced marble or mica, or flattened animal horn, which were somewhat translucent. Flat glass panes in windows did not really come into use until the 17th century.

These days when we have to tackle a window screen repair, we don’t have to consider the difficulty of cutting mica or marble carefully to make sure the window opening is filled. We don’t have to worry about paper being torn by someone accidentally ripping the material. Even old skin or cloth coverings were more easily damaged than the meshes we might use these days in a mesh screen door.

A second development connected to the window opening was the creation of shutters. A window shutter gives the window a solid covering that can be opened or closed as one desires. Made with a frame that fits the window opening, and set with solid panels or louvers of some sort, shutters provide another way of filtering natural light into a habitation. Shutters might be used to manage the amount of light let into a room, or to allow privacy when it is desired. They can give security or even protect the interior from weather.

Shutters are used in a wide variety of placements and appearances. Some shutters are installed inside and open inward. External shutters tend to be heavier and open outward. Some shutters are large and tall, others might cover half the window. Even a door window might have a protective shutter.

A View to the World

These days when we want a view to the world from the inside of our homes, we have a wide variety of options. Our windows can be large plate glass or smaller pieces in shaped frames. We can have functional or decorative shutters. But we can also have screens that do an even better job than shutters at letting in air and keeping out bugs. Even when installing replacement window screens we have the the opportunity to change the view outside the window frame: fine mesh fabrics or sturdy metal weaves give different views with different advantages. Modern window dressing has come a long way from the ancient days of a hole in the wall.