California has seen its most humid summers in several decades. Unfortunately for us, with high humidity comes a very unwelcome set of guests: bugs! Many insects like to breed in high humidity. Some are actually good for us to have around, as they help us and our environment. However, there are some bugs that are a nuisance at best, and downright dangerous at worst. And there is a good chance they could get inside to take a bite out of you if your door and window screens are not up to snuff. Let’s take a run-down at some of Los Angeles’ good and bad bugs to help you know more about that pest just outside your window screen:

Most people will agree that the most annoying insects you’ll see on your window screens are mosquitos. Not only do people find their bites itchy and notice the red welts on their skin, but mosquitos also carry disease. Mosquitos carry the West Nile and Zika viruses, among several other nasty germs. Although crane flies are commonly mistaken for mosquitos (which are usually much smaller), they are not harmful to humans and do not bite. Eradication and control efforts for mosquitos are well underway not only in Los Angeles, but all throughout California, and you can help with those efforts. 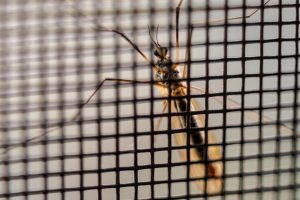 One common aspect about all mosquitos we can take advantage of is their breeding method. Mosquitos need stagnant water for the females to lay their eggs. The process of going from an egg to an adult only takes about 7 days, or even less in the summertime. Make sure there is no stagnant water anywhere on your property, including small buckets, and places where water may collect inside equipment or junk, or in often overlooked puddles and crevices. In addition to keeping your window screens in good repair to keep these bugs out of your home, you can use citronella or insect repellant to temporarily get rid of mosquitos in your backyard and around entryways. However, health officials recommend removing stagnant water as soon as possible as the best way to reduce mosquito populations.

The Asian Multicolored Lady Beetle, commonly known as a “ladybug”, is one of the most well-known bugs around. With their bright red, orange, or tan bodies and black spots, they are easily one of the most noticeable insects in Los Angeles. Adult ladybugs have a voracious appetite for aphids and other plant-harming insects. That makes them a welcome ally to any outside garden. However, in the wintertime, ladybugs like to congregate in clusters inside or near the exterior of homes and offices. Window screens near a warm window are a common place for them to nest.  Once wintered, they emit a pungent odor as a defense against potential predators. In a large group, they can create an unpleasant smell in the area that they choose to settle down in.

Not all species of bees are harmful to humans. In fact, without some bees, like honeybees and bumblebees, we would never be able to enjoy foods like honey. Other bees are good because they will eat other insects and bugs that tend to eat growing plants, vegetables and fruit. However, other bees, such as wasps and yellow jackets, are much more harmful to humans. In most cases, they are more aggressive than other insects.

Especially aggressive are Africanized honeybees, or “killer bees”, which have recently taken hold in Los Angeles. These honeybees are no more venomous than their North American counterparts. The danger of these bees comes from their willingness to pursue their victim over 300 feet away (honeybees usually stop at 30 feet). Add to this their tendency to attack in large groups (their entire colony will usually come out to defend the hive), and they have definitely earned their name ‘killer bee’.

In the sphere of Mother Nature, it’s a bug-eat-bug world. One of the most interesting of those bug-eating-bugs is the praying mantis. Named for their prominent front legs that fold together, the praying mantis comes off as serene and soulful as it sits and “prays”. But the only one praying will be the unfortunate insect that crosses its path. Once they’re ready to strike, they do so with lightning speed. They attack with their folded front legs so quickly that it’s hard to see with the naked eye. In addition, they have spikes on their legs to skewer and pin victims into place. Once caught, a mantis will devour its prey live. Some have even been known to target larger creatures like mice, frogs, and hummingbirds. As one scientist stated, “We’re lucky praying mantises aren’t our size”!

Mantises are also well-known to be masters of disguise. Their camouflage is very important to their survival, and it helps them avoid being eaten by birds, lizards, bats, and other insect-eating animals. Some come in the shapes and colors of sticks or leaves. Others, like the beautiful orchid mantis, take on the shape and coloring of the flowers they inhabit. Even though mantises like to hang on window screens, they haven’t adapted their form to resemble them (yet). Because of their “silent assassin” nature, posture, and colorful bodies, people sometimes keep mantises as pets. Keeping a pet mantis is an interesting and educational experience that does not require a lot of work. You can even ‘train” your mantis to eat from a pair of tweezers.

Most people think of flies as just another annoying insect on their window screens. But it turns out that flies are more dangerous than one would believe. Three of the most common flies in Los Angeles are house flies, garbage flies, and corpse flies. House flies are most common in and around homes, and can be identified as smaller black flies with yellow markings. You can identify garbage flies by their green metallic bodies and bright red eyes. As their name suggests, they love garbage containers and dumps of all kinds, which is where you usually will find them. Corpse flies, or flesh flies, are noted for their love of decaying matter. Like garbage flies, corpse flies also have red eyes. However, they have a distinct black and white pattern on their backs that make them easily distinguishable from other flies. So why are flies so dangerous? 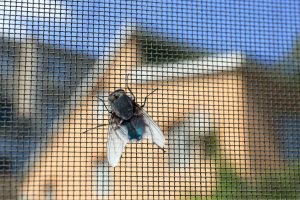 Flies are fairly voracious eaters and are definitely not picky. However, in addition that sandwich on your plate, flies also like to feed on stuff such as decaying matter, feces, open wounds, and other nasty things. Through their feeding, flies will pick up all sorts of harmful bacteria and pathogens on their bodies. When they land on your sandwich, they can transfer all those harmful germs to it, causing diseases like Salmonella and E. Coli. In fact, house flies are strongly suspected of transmitting at least 65 diseases to humans. Yuck! So if you see a fly on your window screens, be thankful that they’re not mulling about on your sandwich instead.

Insects can’t get through the mesh on your screen doors and windows, but they can get through any holes or tears in it. Therefore, keeping your window screens in good repair is probably the best way to keep insects from bugging you during the summer. If you have any holes or worn spot in those screens, you should give your local screen repair professional a call to get them fixed. This way, you can stay bug-free in your home all summer long.